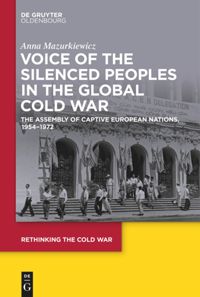 The Polish American Historical Association (PAHA) presents a lecture America, Exiles and Ways to Rally Global Support for the Case of Captive Nations during the Cold War by Anna Mazurkiewicz.

The webinar discusses the Assembly of Captive European Nations (ACEN) – an umbrella organization and a quasi-East European parliament in exile, composed of formerly prominent statesmen who strove to maintain the case of liberation of Eastern Europe from the Soviet yoke on the agenda of international relations.

Founded by the Free Europe Committee, from 1954 to 1971 the ACEN tried to lobby for Eastern European interests on the U.S. political scene, in the United Nations and the Council of Europe. Furthermore, its activities can be traced to Latin America, Asia and the Middle East. However, since it was founded and sponsored by the Free Europe Committee (most commonly recognized as the sponsor of the Radio Free Europe), the ACEN operations were obviously influenced and monitored by the Americans (CIA, Department of State).

This book argues that despite the émigré leadership’s self-restraint in expressing criticism of the U.S. foreign policy, the ACEN was vulnerable to, and eventually fell victim of, the changes in the American Cold War policies. Notwithstanding the termination of Free Europe’s support, ACEN members reconstituted their operations in 1972 and continued their actions until 1989.

Dr. Mazurkiewicz is an Associate Professor of history at the University of Gdansk in Poland. The lecture is based on her recently published book Voice of the Silenced Peoples in the Global Cold War: The Assembly of Captive European Nations, 1954-1972. Professors Sławomir Łukasiewicz of John Paul II Catholic University of Lublin and Harvard University and Neal Pease of University of Wisconsin Milwaukee will provide comments to the lecture.

More: PAHA webinar page, about the book, Univ. of Michigan Zoom registration for the lecture